"Football is so much funnier without a referee, dad!"
"No kid. Football would be fun if you didn't need a referee. If you could play with friends who want to have fun, not idiots who want to win (and are willing to cheat for it)!"


This came out after he told me how a referee (school kid as well) fell for the scenes of another kid, who went on cheating and pushing other players while the referee couldn't see and threw himself on the floor
pretending others pushed him, when the referee was watching.

During school time you meet some of the worst idiots of your lifetime. People that sometimes will become decent adults, but to whom meanwhile you would never give a second chance to prove worth it, if only you were given the chance. But you are not, and must meet them daily for years.
I think good memories of school time prove bad, or at least selective, memory.
Posted by Stef at 23:57 Nessun commento:

Posted by Stef at 13:40 Nessun commento:

Pleas find below a very interesting article about the arrest of the owner of Megaupload, german hacker Kim Dotcom.

I have never used that service, so I can't say if it was good and I won't miss it.

Neveretheless his arrest, once again, offers the opportunity for a discussion about the redefinition of copyright, in order to use it again as a stimulus for development rather than a brake, as many claim it is the case today.

Below an excerpt fom the article:

" But the arrests are already having an impact. Other file-sharing sites such as Uploadbox and FileSonic have shut down or altered the way they operate. Less clear is what that proves: Has the case discouraged infringement or innovation? Media companies have hardly led the charge to develop convenient ways for the tech-savvy masses to watch movies and listen to music whenever and wherever they want. Attorney Julie Samuels of the Electronic Frontier Foundation, a nonprofit that advocates for digital rights, says content producers want to “stem the growth of new business models instead of using their time and energy to compete. They’re working to harm innovation and consumers and artists who are trying to find new ways to connect with those fans.” "

(You can read the whole story here: http://mobile.businessweek.com/articles/2012-02-16/kim-dotcom-pirate-king )

Posted by Stef at 11:18 Nessun commento:

From The New York Times

Why I Am Leaving Goldman Sachs
By GREG SMITH
Published: March 14, 2012
An executive resigns from his position over an integrity problem too big to ignore.

Posted by Stef at 13:01 Nessun commento:

Now I know what I want for my birthday!

Posted by Stef at 20:04 Nessun commento:

Anatomy of an urban thug 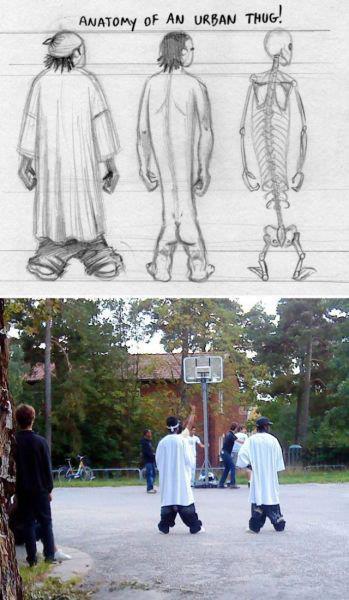 Posted by Stef at 11:05 Nessun commento:

For some in France the USA is world's biggest problem.

Somebody posted this article as an 'amusing reading'.
Below is my answer:


Why amusing?
It's a very widely spread feeling, based on facts and too often comforted by US behaviour.
Some years ago I had the same discussion with somebody claiming -as the author of this article- that people should rather worry about Iran (that didn't make war to anyone since the '80s), North Korea (that didn't make war at all).

At the time, a poll around Europe commissioned by the European Commission, showed that most Europeans (not only 'the French far left') considered USA and Israel as the world's worst warmongers (then fashionable to say 'rogue states').

Only in the latest years, the USA had been bombing to rubble -mostly against or without the UN Security Council decisions- Panama, Serbia, Sudan, Afghanistan, Iraq...(but run away like hell from the only place where everybody agreed they had a peace keeping role: Somalia, where they fucked up big time for not wanting to be under UN command); and they disregarded basic principle of international legality, with their 'special renditions' (=kidnapping without a judge warrant) and torture of anybody suspected of anything based on nothing, with attacks on civilians, with torture camps, both military and of the intelligence...

Still nowadays the Obama administration is retiring from countries where the USA created new problems (e.g. The islamic militants active nowadays in Iraq had no space whatsoever under Saddam Hussein, without wanting to defend him) or didn't solve the old ones; is threatening to start a new campaign against Iran, didn't solve the credibility trap of Guantanamo, is issuing a real war (including the infamous 'secret arrest warrant') against Wikileaks and its leader Julian Assange, whose only crime is making government and institutions liable to public scrutiny (shouldn't it be compulsory to call a country 'democratic'?) ...

So now, tell me again: why do you find amusing that some in France or elsewhere think that the USA today is the world's biggest problem?
Shouldn't you rather consider it a ringing bell?

Posted by Stef at 10:28 Nessun commento: