Posted by Stef at 11:36 Nessun commento:

Posted by Stef at 12:08 Nessun commento:


I was convinced I had posted it long time ago, but I couldn't find the post, so...

Posted by Stef at 12:09 Nessun commento:

Posted by Stef at 23:34 Nessun commento:

Neoliberalism has brought out the worst in us
Paul Verhaeghe

'We are forever told that we are freer to choose the course of our lives than ever before, but the freedom to choose outside the success narrative is limited.' Photograph: Lefteris Pitarakis/AP

We tend to perceive our identities as stable and largely separate from outside forces. But over decades of research and therapeutic practice, I have become convinced that economic change is having a profound effect not only on our values but also on our personalities. Thirty years of neoliberalism, free-market forces and privatisation have taken their toll, as relentless pressure to achieve has become normative. If you’re reading this sceptically, I put this simple statement to you: meritocratic neoliberalism favours certain personality traits and penalises others.

There are certain ideal characteristics needed to make a career today. The first is articulateness, the aim being to win over as many people as possible. Contact can be superficial, but since this applies to most human interaction nowadays, this won’t really be noticed.

It’s important to be able to talk up your own capacities as much as you can – you know a lot of people, you’ve got plenty of experience under your belt and you recently completed a major project. Later, people will find out that this was mostly hot air, but the fact that they were initially fooled is down to another personality trait: you can lie convincingly and feel little guilt. That’s why you never take responsibility for your own behaviour.

On top of all this, you are flexible and impulsive, always on the lookout for new stimuli and challenges. In practice, this leads to risky behaviour, but never mind, it won’t be you who has to pick up the pieces. The source of inspiration for this list? The psychopathy checklist by Robert Hare, the best-known specialist on psychopathy today.

This description is, of course, a caricature taken to extremes. Nevertheless, the financial crisis illustrated at a macro-social level (for example, in the conflicts between eurozone countries) what a neoliberal meritocracy does to people. Solidarity becomes an expensive luxury and makes way for temporary alliances, the main preoccupation always being to extract more profit from the situation than your competition. Social ties with colleagues weaken, as does emotional commitment to the enterprise or organisation.

Bullying used to be confined to schools; now it is a common feature of the workplace. This is a typical symptom of the impotent venting their frustration on the weak – in psychology it’s known as displaced aggression. There is a buried sense of fear, ranging from performance anxiety to a broader social fear of the threatening other.

Constant evaluations at work cause a decline in autonomy and a growing dependence on external, often shifting, norms. This results in what the sociologist Richard Sennett has aptly described as the “infantilisation of the workers”. Adults display childish outbursts of temper and are jealous about trivialities (“She got a new office chair and I didn’t”), tell white lies, resort to deceit, delight in the downfall of others and cherish petty feelings of revenge. This is the consequence of a system that prevents people from thinking independently and that fails to treat employees as adults.

More important, though, is the serious damage to people’s self-respect. Self-respect largely depends on the recognition that we receive from the other, as thinkers fromHegel to Lacan have shown. Sennett comes to a similar conclusion when he sees the main question for employees these days as being “Who needs me?” For a growing group of people, the answer is: no one.

Our society constantly proclaims that anyone can make it if they just try hard enough, all the while reinforcing privilege and putting increasing pressure on its overstretched and exhausted citizens. An increasing number of people fail, feeling humiliated, guilty and ashamed. We are forever told that we are freer to choose the course of our lives than ever before, but the freedom to choose outside the success narrative is limited. Furthermore, those who fail are deemed to be losers or scroungers, taking advantage of our social security system.

A neoliberal meritocracy would have us believe that success depends on individual effort and talents, meaning responsibility lies entirely with the individual and authorities should give people as much freedom as possible to achieve this goal. For those who believe in the fairytale of unrestricted choice, self-government and self-management are the pre-eminent political messages, especially if they appear to promise freedom. Along with the idea of the perfectible individual, the freedom we perceive ourselves as having in the west is the greatest untruth of this day and age.

The sociologist Zygmunt Bauman neatly summarised the paradox of our era as: “Never have we been so free. Never have we felt so powerless.” We are indeed freer than before, in the sense that we can criticise religion, take advantage of the new laissez-faire attitude to sex and support any political movement we like. We can do all these things because they no longer have any significance – freedom of this kind is prompted by indifference. Yet, on the other hand, our daily lives have become a constant battle against a bureaucracy that would make Kafka weak at the knees. There are regulations about everything, from the salt content of bread to urban poultry-keeping.

Our presumed freedom is tied to one central condition: we must be successful – that is, “make” something of ourselves. You don’t need to look far for examples. A highly skilled individual who puts parenting before their career comes in for criticism. A person with a good job who turns down a promotion to invest more time in other things is seen as crazy – unless those other things ensure success. A young woman who wants to become a primary school teacher is told by her parents that she should start off by getting a master’s degree in economics – a primary school teacher, whatever can she be thinking of?

There are constant laments about the so-called loss of norms and values in our culture. Yet our norms and values make up an integral and essential part of our identity. So they cannot be lost, only changed. And that is precisely what has happened: a changed economy reflects changed ethics and brings about changed identity. The current economic system is bringing out the worst in us.

Posted by Stef at 08:28 Nessun commento:

The fact that madness is shared by masses doesn't make it any less despicable. 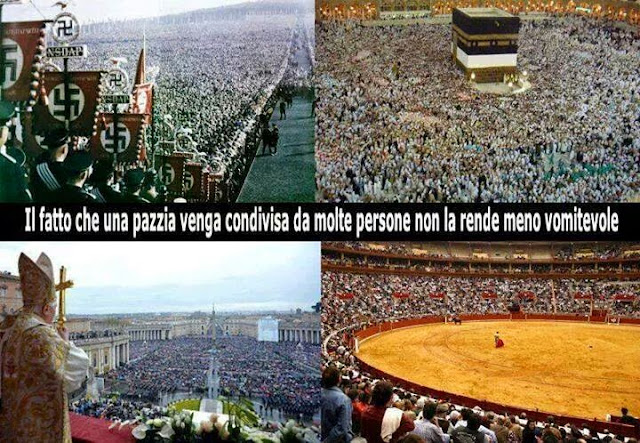 Posted by Stef at 11:14 Nessun commento:

Posted by Stef at 09:29 Nessun commento:

Posted by Stef at 18:46 Nessun commento:

Posted by Stef at 01:55 Nessun commento:

I can't get no satisfaction

Perhaps what we call depression isn’t really a disorder at all but, like physical pain, an alarm of sorts, alerting us that something is undoubtedly wrong; that perhaps it is time to stop, take a time-out, take as long as it takes, and attend to the unaddressed business of filling our souls.

Posted by Stef at 07:15 Nessun commento:

Any fool can be happy

Posted by Stef at 23:33 Nessun commento:

Posted by Stef at 12:09 Nessun commento:

I could have written this

This article was published in Salon a couple of years ago.
I could have written it.


Game over, my conservative friend

Dear Rick,
I guess it’s not going to work out. I guess this is goodbye.
For 20 months now, since a few days after the Green Bay Packers won the Super Bowl and Gov. Scott Walker moved to crush public unions in Wisconsin and the protests began at the state capitol building in Madison, we have argued nearly every day of the week. We have argued late at night, in our underwear, with you full of Evan Williams and me full of French red wine. We have argued during your son’s football games. We have argued when my daughters have been playing Monopoly with me. We have argued at the mall, at the grocery store, out for dinner, out for a stroll with the dog, at work, at ballgames, at weddings, at funerals, in the sunshine, in the rain, in the snow, in sight of the beautiful summertime dew that clings to the grass here in Wisconsin, way early in the morning, even during that long drought in July and in August when rain was as scarce as good will toward people whose political views are not the same as our own. We never stopped, Rick.  We never surrendered.
I should give you credit for being as tough and as unrelenting as you are, and I should give myself credit for hanging in there with you for as long as I have, but honestly, the whole thing, well, neither of us should feel proud.   Maybe we have fought because our love is so intense, because is it not true that people with the most profound love generate between them the most inextinguishable hate? Maybe we should have stayed away from each other in the first place? Or at least, if were unable to contain ourselves, we should have argued in private?
As it is, each and every one of my Facebook friends thinks you’re a boorish, one-minded, undereducated asshole with no feelings for anything but numbers. At least 10 of my friends have blocked you and won’t allow me to mention you, ever, no matter the context, because they think you are embarrassing and a demeaning waste of my time and that the constant bickering makes everybody look bad. Same works the other way around, I am absolutely sure. I know your friends think I’m a jackass and a pompous, foulmouthed, rude prick who thinks way too much of himself.   Lots of your friends have blocked me, too, and have no doubt told you to stay clear of me. People avert their eyes when we strike up the band, Rick. We are, in everybody’s estimation, a disgrace.