Posted by Stef at 11:59 Nessun commento:

Inspirational. What is school for, if not for learning this?

Posted by Stef at 16:29 Nessun commento:

Yesterday I fell on the blog of one of the smartest, wittiest, strongest (and most poisonous) persons I ever met virtually in my social web wandering.

I read some of her posts and was amazed by her elegance and style (not to mention, for once, an astonishingly rich and appropriate use of the English language!).
I knew it.
I had discussed with her on forums and read "behind her back" her posts in threads I had not contributed to.

But a discussion is different, faster, it is an exchange of different opinions. It is answers and reactions...
A blog, for its nature, is much more personal, whether or not it opens the opportunity for discussion (via the comments). A post in a blog is aimed at itself. It suffices.

I am still a newbie in this and still refrain from replacing my usual writing for myself with this world-wide blackboard.
But if you ask me why bloggin is worth the effort, I will answer you to read Britical.

You don't have to agree with her (I occasionally don't myself) but it is worth reading a brilliant brain at work.

Posted by Stef at 12:33 Nessun commento:

A drunk man who smelled like beer
sat down on a subway next to a priest.

The man's tie was stained, his face was
plastered with red lipstick, and a half empty bottle
of gin was sticking out of his torn coat pocket.

He opened his newspaper and began reading.
After a few minutes the man turned to the priest and
asked, "Say, Father, what causes arthritis?"

The priest replied, "My son, it's caused by loose living,
being with cheap, wicked women, too much alcohol
and a contempt for your fellow men, sleeping around
with prostitutes and lack of bathing."

The drunk muttered in response, "Well, I'll be damned,"
then returned to reading his newspaper.

The priest, thinking about what he had said, nudged
the man and apologized, "I'm very sorry. I didn't mean to
come on so strong. How long have you had arthritis?"

The drunk answered, "I don't have it, Father. I was just
reading here that the Pope does."
Posted by Stef at 17:53 Nessun commento:

"Isn’t it enough to see that a garden is beautiful without having to believe that there are fairies at the bottom of it too?" 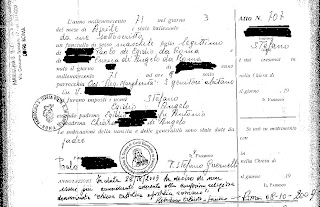 Posted by Stef at 20:19 Nessun commento:

During the first half century of republican life, we had the cold war at home: a good third of the country was sympathising with the eastern block, while a half was pro West.
Only the latter were 'allowed' to power because we all knew that if the communist party won the elections and claimed power CIA would have imposed a dictatorship (as in Chili, Greece, etc.). -> no alternance -> corruption.

When the wall came down in '89 the centre-right parties in power lost their main argument and crashed down under trials of corruption.
Half the country found themselves politically 'orphans' and scared that the old 'communist' (who had not been such for decades already) came to power.

Berlusconi (who had lost his protector -Craxi- who died on the run from justice, and who had nobody anymore to protect him against his huge debts and several coming trials) smelt the opportunity, made of himself the 'paladin of anticommunism' and 'adopted' that important part of the electorate that was unable to think out of the schemes that had ruled the republic since its very beginning (Communists vs.- pro-westerners) while giving access to parliament to those political forces that could not be presented as viable until then (the heirs of Mussolini, the regional separatists...).

All serious politicians of any colours were therefore obliged to ally against him, despite the fact that they were extremely distant from one another (from the former republicans, to the former communists, from the former socialists to the former Christian parties...).
The result is that the several parties of the opposition have been fighting one-another for visibility much more than they have ever been countering Berlusconi.

In the meantime, he could strengthen his grip on media and also grab the public media when got to power.
I've been in Italy recently and I realise that they really live in a bubble with very little access to normal info, while the few normal newspapers and TV programmes remaining are tagged as 'militant' by mainstream info.

Berlusconi doesn't have the problems that centre-left have, because his allies can only access power together with him. He only needs to satisfy their requests on the easy slogans (e.g. security -> patrols, against all real crime statistics) and in exchange they let him satisfy his own agenda for himself and his electorate (de-classification of financial and fiscal crimes, etc.)

Posted by Stef at 10:46 Nessun commento:

The frustration of a sterile graphomaniac

"Graphomaniac" defines me rather well.

I started a number of books without ever finishing any, but what I really enjoy is the act of writing itself.

In the last years, online forums gave me the opportunity of satisfying this need by interacting and debating in written, a much more effective way than the oral form to communicate, when your point is not only impressing; when what you want to exchange is real content, real opinions, real understanding...

While writing you can double check the facts you are mentioning by heart, you can review what you wrote without thinking before launching it in the world, you can re-read that offensive line you were going to post against somebody and remember that you are not like that: you are not going to offend somebody unless you can include in the same sentence all the elements that justify that attack.

And over all no impolite fast-food-minded idiot can interrupt you in the middle of a reasoning, judging what (s)he thinks you were going to say before having let you the opportunity of saying it, often contesting you for something you were not going to say at all.

Finally, there is this comforting impression that it is worth saying what you are going to say. That someone will listen and be interested in what you are saying, not in the way you are looking at them while saying it.
... whether it is actually the case or not.  :)

Only one day you realise that most of the time it is not the case, we live in an era of superficiality, where what counts is success, that only translates in money and fame.
Most of the time conversation is a social tool, useful to fill the void with the comforting impression of not being alone.
A conversation most of the time is over all an opportunity for looking good, rather than for exchanging content and tickle our minds.

And writing loses its appeal as well, like sending radio messages to an infinite space where you know nobody is there to listen.
Posted by Stef at 11:42 Nessun commento:

Posted by Stef at 10:40 Nessun commento:

Who ever said one shouldn't wish (not pursue, of course) somebody's death?
Thanks again and again Tony! :)

Posted by Stef at 11:34 Nessun commento:

Posted by Stef at 16:04 Nessun commento:

Posted by Stef at 23:44 Nessun commento: I need a tinfoil hat!

Yesterday I was discussing with a friend on whether it was worth to buy the extremely expensive yearly bus card in Geneva, given that they never control. This morning three controllers stormed my bus.